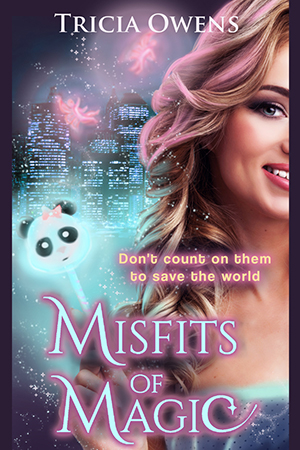 They’re the Other Guys. Not cool, mediocre at magic, and absolutely clueless.

Forming a rock band sounded fun to Kenzie and her friends, but there are two pretty big problems with the idea: 1) they don’t know how to play their instruments and 2) every time they perform, they accidentally unleash weird dark magic upon their city. Even worse, the police think they’re responsible. As if they could ever be responsible!

On the plus side, they have Kenzie, their oblivious but well-meaning fairy princess lead singer, along with three disgraced detectives who know nothing about magic. On the downside, they’re all incompetent.

Dreamers never say die, though, and these friends are determined–and maybe just a little bit motivated by possible jail time–to solve the mystery of these unexpected magical side effects before a genuine catastrophe occurs. Working alongside a special police task force means they’re sure to get results. Right?

If only these magically inept friends could save a dollar, much less the world. It’s a good thing luck is as powerful as magic.

Misfits of Magic is a feel good, low-stakes urban fantasy adventure about friendships and chasing your dreams (no matter how dumb.) Because sometimes, all you can do is laugh.